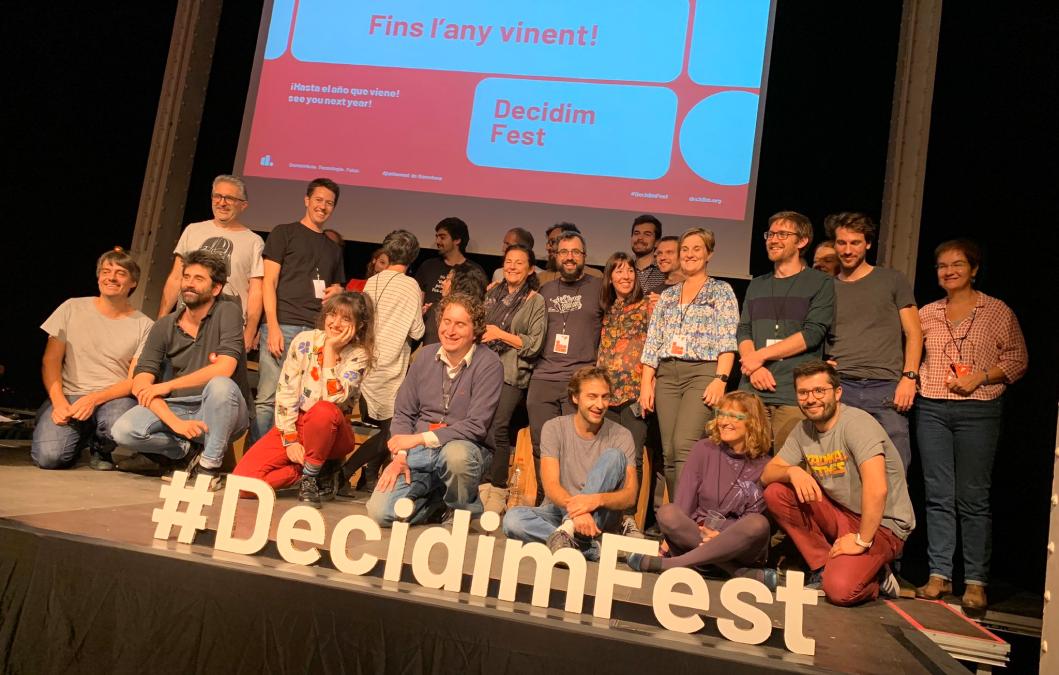 A look back at Decidim Fest 2019: the annual event of the Decidim community

The aim of the DecidimFest is to bring together the different actors (researchers, companies, associations, etc.) of the Decidim community internationally, to present the latest advances of the Decidim project and to get inspired by other communities and free software with similar missions. Every year, theOpen Source Politics (OSP)team is invited to present its use cases and this is an opportunity for us to strengthen our relationships with our Spanish and international partners.

In this article you will find a summary of what was presented during these three days.

Looking to the future: the Roadmap 2023

Before the official start of the Decidim Fest, we had the opportunity to attend the General Assembly of the Decidim Association, to take stock of what had been achieved so far and the roadmap for the coming years.

Keyfacts :
The Decidim association now has legal status and has registered its brand. In addition, an agreement between Localret (the Catalan IT services purchasing office) and the city of Barcelona has been signed to promote the Decidim platform over the next four years. Finally, it is now possible to become a member of the association for an annual fee of 40 euros(click here for more information).

One of the challenges of the next four years is to find different ways of financing to ensure financial stability. The association wishes to increase its staff in order to ensure the maintenance of the core technology, to deepen the documentation (technical, functional, use cases), to disseminate it to as many people as possible and to promote the democratic and ethical guarantees of the project. The general assembly ended with a presentation of the feedback on the Decidim Day organised by OSP on 12 September 2019 with more than 150 participants and 30 speakers with the overall objective of making Decidim known in France and thinking about the future of the digital commons. For more information, see here.

The day was introduced by the new head of participation of the city of Barcelona (Marc Serra). He announced the implementation of a large-scale participatory budget and a training plan in Decidim for the most digitally illiterate to ensure better inclusion in the technopolitical tools.

Other interventions focused on key issues of digital governance: how to provide a direct response to the impact of the web giants on democracy, how to ensure the democratisation of technology and society, or how to resolve the conflict between the notion of privacy and the contemporary demand for constant connection.

Presentations throughout the day illustrated how the decentralised, free and open source model that respects the personal data and anonymity of participants enables rapid distribution of data and governance in multiple contexts.

Highlights:
Arnau Monterde, Decidim project coordinator for the city of Barcelona, presented the short-term roadmap for the software. Many improvements will be made to the existing system in order to further enhance the quality, robustness and usability of Decidim for users and administrators. In the longer term, the Decidim community will continue to explore the security of votes thanks to the blockchain (note that very solid prototypes have already been produced during the Decode project), the use of ethical artificial intelligence in the service of participatory democracy, the federation of Decidim instances, etc. We also note the intervention of Ben Cerveney, from the Public Code Foundation, whose objective is to accompany public institutions in the production and adoption of digital commons. His presentation highlighted the extent to which the city represents an ideal level for producing "public code". Decidim is an excellent example of this vision as it was initiated by the city of Barcelona and has implemented most of the good practices recommended by the Public Code Foundation, namely

"Software is transitioning from technology to infrastructure, cities have a civic responsibility to build public code bases

The afternoon was marked for OSP by the intervention of Virgile Deville in the panel how to improve participatory budgets and processes in practice? With the example of the first five institutions that renewed the experience for a second edition, Virgile illustrated how OSP implemented technical improvements on the user experience that allowed a significant increase in participation during the project voting phases.

We were delighted to see that Paula Forteza came to present different use cases of Decidim in France. She presented the use of Decidim by the Citizen's Climate Convention, but also her site used to collect citizen questions to ask the Government at the National Assembly, and her involvement in the Vivons Paris campaign where Decidim is used to draw citizen candidates for the municipal elections. Its presence as a pioneer in civic tech, open data and government transparency is for us a strong signal that Decidim is now widely identified in France as a reference tool for conducting consultation processes.

Day 2: Case studies and research, Decidim results in the field

On the second day, the presentations focused on successful case studies, but also on the presentation of numerous scientific studies on the use of digital tools for governance and participation in public and private bodies.

One of the most striking concrete cases was that of the participatory budget of the city of Helsinki, presented by Katja Henttonen, who has been using Decidim for 2 years. Many initiatives have been taken, including the establishment of a network of local ambassadors and an additional step to collaboratively deepen proposals. TheHelsinki Decidim instance is now the one with the most users in the world (over 70k users).

The City of Helsinki presented the user research work carried out by the city to simplify the user experience as much as possible. Numerous developments were carried out by the City of Helsinki and given back to the community as open source. It was on this occasion thatOSP collaborated on a module simplifying the user experience for the voting phase. The participatory budget has attracted 40,000 new users and now 10% (59,000 users) of the population is registered!

The other highlight of the morning was a round table discussion on the phenomenon of surveillance capitalism and its alternatives with Mara Balestrini, Antonio Calleja and Liliana Arroyo Mollner.

The second part of the afternoon was punctuated by the presentation of the latest results from different researchers in the Decidim community. Maite Lopez Sanchez from theUniversitat Autonoma de Barcelona, did a remarkable job on how to use artificial intelligence in Decidim participatory processes. Using optimisation algorithms, she and her team have shown that we can significantly improve the way we choose the winning projects in a participatory budget. Instead of simply choosing the winning projects in descending order of votes, this research team used an algorithm that selects projects according to two variables: maximising the use of the budget and the number of supporters represented by the selection. The results are impressive: +30% of budget used, +70% of supporters represented. Well aware of the mistrust that citizens may have towards algorithms, Maite insisted on the importance of using open source algorithms and of developing educational material explaining how these algorithms work.

Pablo Aragon presented a comparative study of the Madrid and Barcelona petition platforms. He demonstrated how trivial technical choices have important political consequences. The case study presented explained how putting the most recent petitions before the others on Decide Madrid biased their capacity to gather enough support, which is why on Decidim the lists of proposals and initiatives are displayed randomly.

Xabier Barrandarian concluded this edition of the Decidim Fest with a presentation of the Decidim White Paper, which is intended to be collaborative and whose purpose is to give a context to this technopolitical project, to explain the choices of technical and functional architecture and to envisage how the advent of the decentralised technopolitical network democratises society.

Once again, Decidim Fest was able to bring together a diversity of actors (social, economic, scientific and political), which is essential for any project dealing with democracy. We take as a sign of maturity the presence of many international actors: the Mozilla Foundation, Public Code Foundation, Better NYC, the MP Paula Forteza, the cities of Mexico and Helsinki. We are pleased to see that the Catalan institutions (the city of Barcelona, Localret, the Generalitat de Catalunya) that initiated and spearheaded the project plan to continue investing heavily in Decidim. Finally, the first results of the different research projects have been promising and it is an incomparable asset to have a scientific community that stands back from the impact of Decidim on society.

We cannot help but conclude by mentioning the Spanish government's decision to ban decentralised identity technologies such as Decode Project, which gives users total control over their data, and the Catalan court's decision to declare the legal framework for citizen participation, one of the most advanced in the world, null and void.