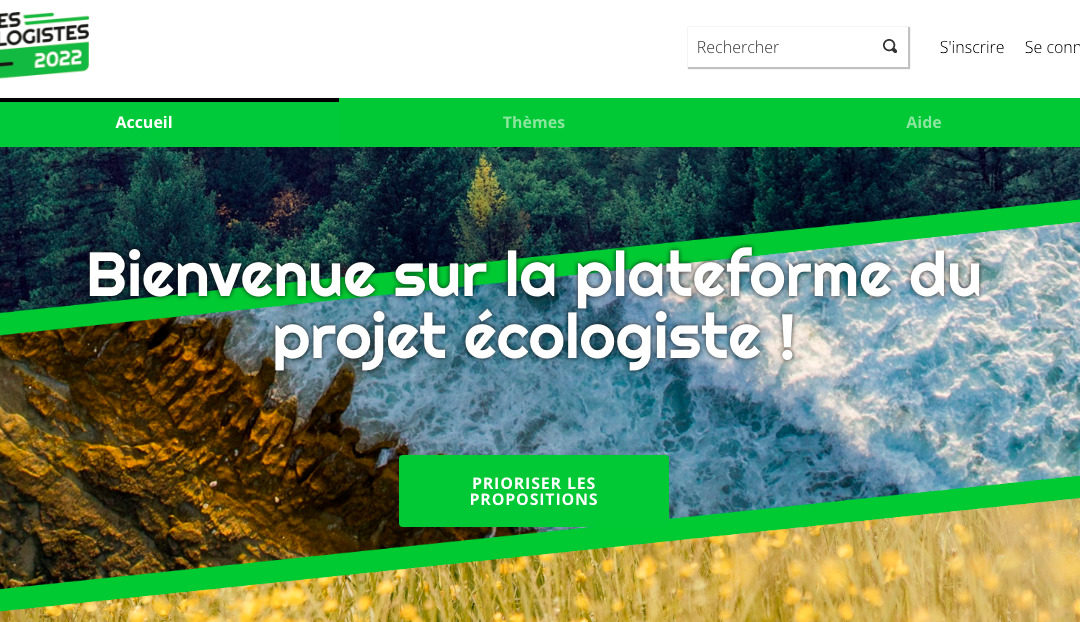 The participatory platform of the Green primary!

While only 16% of French people trust political parties according to Cevipof, several environmental parties have come together to collect citizens' proposals on a participatory platform to be launched in May 2021. This article describes the context of the process and the organisation of the platform of the Green primary.

Registration for the Green primary is open to the general public

The purpose of the common participatory platform is to collect citizens' proposals before the co-construction phase of the legislative and presidential programme. The contributions submitted will thus feed the common programme of the alliance of ecological movements for the next elections.

Open to the public without restriction of age, location or political opinion, the aim of the platform is to collect and prioritise citizens' proposals. To this end, registration to the platform only requires to indicate :

The architecture of the participatory platform of the Green primary

As with the Citizens' Climate Convention platform, the Green platform is broken down into 6 themes. The themes are :

Each theme has specific sub-themes or categories. For example, the theme "Education and shared cultures" has 5 categories. This stratification makes it possible to order the discussions and to better process the citizens' contributions at the end of the submission phase.

Each of the 6 themes has two Proposal modules and an information page. First, the first module "Initial proposals" is the place where all citizen contributions can be submitted. All you have to do is to indicate a title, describe the contribution in the body and put it in one of the categories of the theme to publish the proposal on the platform. The support and comment functions have been activated for better interactivity.

Then, in the second module 'Proposals to be prioritised', users were invited to support the official proposals of the Green Pole. This module allows for the prioritisation of contributions.

Finally, the last module contains the contributions of the different committees and elected representatives of the five green political movements.

A common project and programme

The summer university of the ecologists has allowed the restitution of the citizens' and official contributions deposited on the platform. Several debates were organised so that the ecologist project could be adopted by the candidates in the ecological primary held from 19 to 28 September. Thus, the "ecological pole" will soon have not only a candidate but also a common program. TheOpen Source Politics team is happy to have accompanied and deployed this project of co-construction of a common program to several political movements. 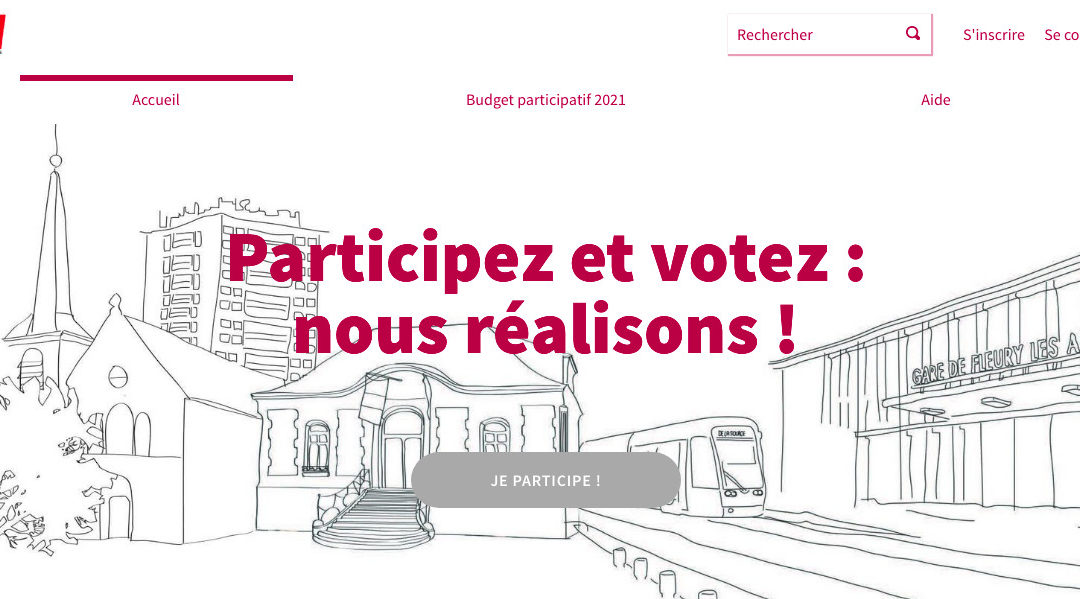 Case study of the first participatory budget in Fleury-les-Aubrais

Despite the uncertain health situation, the Fleury-les-Aubrais town council has launched its first participatory budget with a budget of €100,000. The ideas submitted on the platform must constitute new projects implemented in public spaces and accessible to the public on the territory of the municipality. All residents of the municipality over the age of 16 can submit their ideas and vote for the projects.

How to submit an idea on the participatory budget platform?

To register for the platform, simply insert :

Help texts are inserted in the submission form to facilitate the submission of ideas. The user simply has to describe his or her idea, choose a title and enter the idea in one of the categories of the participatory budget (sport, culture, leisure, ecology, parking and safety). Each idea may not exceed 1500 characters. However, it is possible to insert documentation in docx or odt format or images and videos. Finally, users can submit up to 5 ideas and vote for up to 3 projects.

The results of the Fleury-les-Aubrais participatory budget

In total, more than 90 ideas were submitted on the platform. Following a feasibility study of each idea, 32 projects were submitted to the vote of the residents of Fleury-les-Aubrais for one month. The voting phase finally selected 11 projects. Although the public meetings had to be cancelled due to the health situation, the participatory budget platform gathered 600 participants and 1800 votes.

This very satisfactory result was achieved in particular thanks to the work carried out in the Les Jacobins and René-Guy-Cadou libraries as well as in the neighbourhood centres so that the reception staff of each establishment are able to mediate on the platform.

How to follow the evolution of the projects selected on Decidim?

Indeed, the Follow-up module of Decidim allows to follow the progress of the achievements of a participatory budget. It is sufficient to indicate the description of the stages of realisation, by linking the initial idea and the project submitted to the vote. The services can also attach images to prove the progress of the work. This feature ensures the transparency of projects, as in the case of thedevelopment of the exterior of the Jacobins swimming pool.

The public officials of Fleury-les-Aubrais are now almost autonomous in the administration of the participatory budget on Decidim. The teams in charge of the administration of the platform have been trained in Decidim.Open Source Politics ' consultants assisted the city council in the deployment of the platform. Open Source Politics is therefore pleased to provide very specific advice to the agents in charge of the platform, which has become a digital commons for the municipality of Fleury-les-Aubrais.

Decidim is a modular software that can be adapted to many needs. We have documented several emblematic use cases of Decidim in France in these blog posts:

For more information about our support, you can make an appointment via this link! 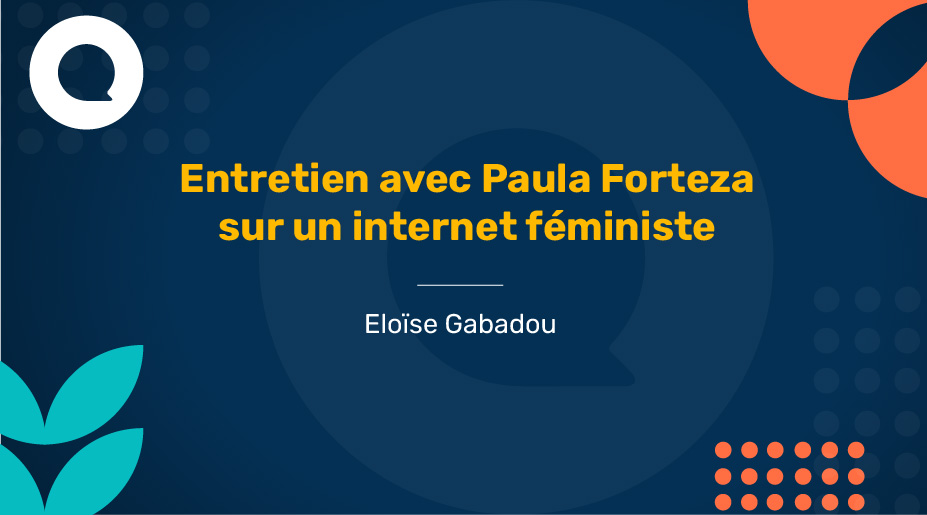 Interview with Paula Forteza on a feminist internet

We had the pleasure of conducting an interview with Paula Forteza, Member of Parliament for the French abroad on 18 March, a few days after the International Day for Women's Rights. The theme of our interview: a feminist internet.

This notion of feminist internet (or cyberfeminism) is a fundamental principle of the Decidim community; several initiatives have been taken to fight for safe spaces and against the gender bias inherent in a technological service (more details here). Please see our article on Digitalinclusion- a key issue for participation.

The movements to defend the digital commons and the feminisation of the internet converge on several levels: community empowerment, democratic principles at the heart of technological development, the ambition to establish safe spaces for discussion for all, technological non-determinism and the cultural layer to be provided...

This article is a transcript of the interview.

How would you define a feminist internet?

A feminist internet must have at least 3 characteristics:

How can gender bias on the internet be tackled if the population in the technology sector is very unequal?

In most cases, women in the technology sector are neither in technology-related positions nor in management positions, but very often in the communication area. This can be seen in several sectors.

The example of Wikipedia is also telling: there are only 18% of women's biographies on Wikipedia in 2020 and these biographies are often shorter and less elaborate than those of men. They refer to family or relationship issues - the private lives of women - while men's biographies have more details about professional careers. This reflects an important reality about the platform's contributors: only 8.8% of women contribute to Wikipedia.

It also reminds me of the applications developed by women to understand the menstrual cycle for example. These kinds of applications didn't exist at all before women started developing them. This is also what a feminist internet is all about: when there are more women coders, it will also give tools and services that are much more adapted to women's needs.

I am convinced that it is thanks to women and female practitioners in this sector that the internet and technology will be feminised.

How do you explain the natural convergence between this definition of a feminist internet and the digital commons?

The link between the two movements is clear. A digital space that will be respectful, open, where we will pay attention to each other, will also be a space where everything is transparent, auditable, where we give space and power to the community. These are not hierarchical or centralised spaces but spaces of mutual support. Both movements come from a community logic.

For example, to deal with online hate: the best way to moderate it would be to set up community moderation mechanisms, along the lines of Wikipedia. These mechanisms could lead to healthier spaces both in terms of what is said and how to deal with cases of cyber-bullying and online hate.

There are also counter-examples to this.

There is not 100% technological determinism. There are certain platforms that emphasise their open code and a logic of code is law* - this is a first step. However, there is also a lot of human and cultural work that does not depend solely on code.

Let's take the example of Github. A collaborative platform for creating code together that is in line with the movements we are carrying. Women did an experiment in which they posted commits (contributions) with men's names and then with their own women's names.

Commits were much more accepted when they were published as men. We can find the same logic in the world of gaming, which remains misogynistic at times and often closed in on itself. There are therefore two layers to consider: technological determinism and the cultural and behavioural dimension, which must be combated at another level.

On the digital commons side, when we theorise a bit too much and talk in the abstract, we can lose people with our jargon and references. The way to get the message across and show the impact and interest to people outside the sector is to give examples:

show that we can do a random draw on citizens' lists, or collect citizens' questions and ask them of the government, and still have the ability to audit the code of the technology and make sure that there has been no bias or rigging in the counting. These examples are important steps towards a feminist internet.

The future of AI is now being written on historical databases.

Some examples to illustrate my point:

What could the public authorities do to enhance the value of women in these environments?

It's quite counter-intuitive because I'm a Member of Parliament and a digital expert, but I'm not necessarily in favour of over-legislating in the digital sphere. New technologies move much faster than the law. The law must remain global and based on technologically neutral principles in order to give the players room for manoeuvre to innovate and move forward.

The public authorities must act at the source, on having more women in computer schools, for example. One idea that is not very popular in France is that of positive discrimination policies: quotas and scholarships dedicated to women should be considered.

I was against quotas for a long time, because I didn't really want to be stigmatised and told that my place was only justified by my gender. But it doesn't just happen.

There are times in our contemporary history when we need to give small nudges to accelerate change.

The aim is to get people used to seeing women in positions previously unoccupied by them. Furthermore, quotas must always be complemented by the creation of safe spaces to ensure an equal opportunity to speak.

When we talk about the feminist internet, the feminist code specifically, it is complicated to try to force technological development in a certain direction. We are seeing more and more MPs taking up these digital issues but they are sometimes doing it in a very clumsy way. So MPs are not the most relevant people here. The people who know best how to tackle these issues are the digital practitioners. They live it, they can describe it, they can speak out for it and they can act to change it.