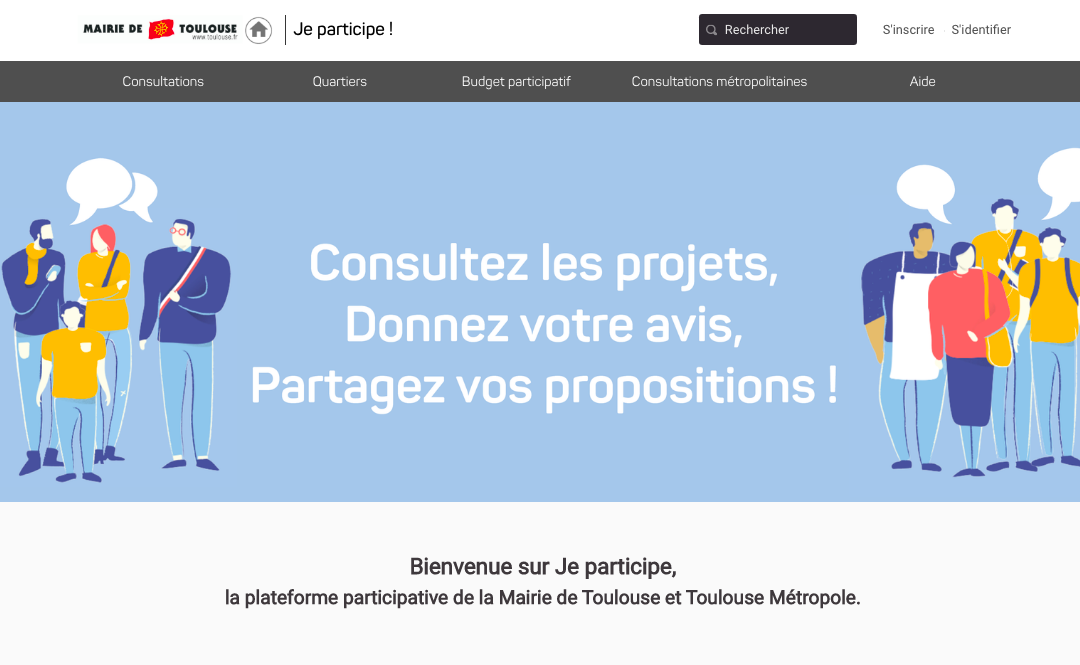 How the city of Toulouse uses Decidim

The administrative organisation of the city of Toulouse

The various bodies for citizen participation in Toulouse

The platform for citizen participation is part of many consultation and citizen participation bodies. There are several places for exchange and information such as the five Citizenship Houses and several Project Houses. The Development Council of the Toulouse metropolitan area is consulted on the planning and development projects of the agglomeration. In addition, the Citizens' Councils involve the residents of the 16 priority neighbourhoods of the metropolis in the preparation and evaluation of the City Contract. For younger people, the city has a Municipal Children's Council, a Toulouse Youth Council and a Toulouse Student Life Council. Finally, there are also thematic bodies such as the Council for Secularism and the Toulouse Council for Foreign Residents.

How does Toulouse use its citizen participation platform?

The city of Toulouse has a participatory budget and regularly organises consultations with its residents using Decidim. In addition, a dedicated space relays the participatory mechanisms undertaken at the level of the Toulouse metropolis. Finally, calls for projects and citizen initiatives are also relayed on the platform. Here are several Decidim features put into practice:

The consultation area improves the readability of current development projects. Concertations are thus structured in distinct stages, such as the concertation on the development of the Daste and Poudrerie green spaces. Residents can also register from the platform for workshops organised as part of a development project. For example, the Faubourg Malepère development project, the Mirail Université urban renewal project and the Jardin Partagé aux Pradettes project.

It should be noted that each district of the city of Toulouse has its own space on the platform. This organisation makes it possible to indicate all the participatory processes by district. From each space, residents can subscribe to the neighbourhood newsletter.

The city of Toulouse uses the Proposals feature to collect ideas from residents. For example, the residents of Toulouse submitted 105 ideas for the 2019 participatory budget. The idea holders presented their proposals publicly at the Capitole de Toulouse during the Agora of Ideas. Finally, the 30 selected ideas were voted on the platform. 14 projects were finally selected and are still in progress, as can be seen in the Follow-up module.

The Survey feature allows users to ask questions about small development projects. Citizens can thus give their opinions on the parking facilities in rue Maurice Bécanne, rue des Giroflées and rue des Jonquilles.

Why an interactive map of the city of Toulouse?

The city's services wanted to bring the people of Toulouse closer to each consultation. They took advantage of the administrative breakdown of Toulouse to have Open Source Politics develop an interactive view of the participatory mechanisms. This module indicates the consultations underway in each district of Toulouse. Users can thus directly access the consultations that will affect them.

The rich and varied use of Decidim by the city of Toulouse is far from being an isolated case. We have documented several emblematic use cases of Decidim in France in these blog posts:

For more information about our support, you can make an appointment via this link!